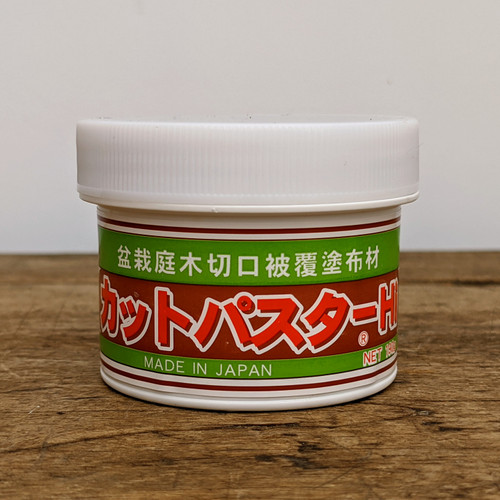 Safe & Reliable Shipping
We've been doing this since 1987

Or Free In Store Pick
Save a few bucks, pick up in store

A thick paste made to seal off cuts and keep sap from bleeding. Very popular with experienced bonsai specialists.

When an injury or break in the bark exposes the underlying wood, bacteria and fungi in the air and on the bark contaminate the wound surface. At the same time, the tree (bonsai or other) responds to the wound by producing chemical and physical barriers in an attempt to block the invasion of microorganisms and to seal off the damaged area.

Japanese Cut Paste can help this tree's physical response. This is a putty based wound sealant that is used for sealing around the perimeter of small & large cuts. Kneed the paste into a ball and apply directly to the wound.

The White Cap Jar: Compound is a light grey great for all trees except conifers. Use Green cap jar for conifers.